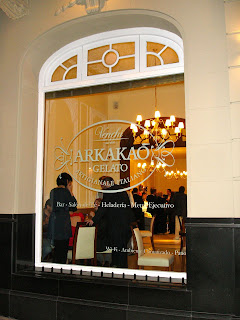 I took my daughters to the grand opening, even though I had an opening of my own earlier in the day, which will deserve it's own blog post, and I had to go to a school rehearsal (school play we are putting together for the kids).

It was a very long day.

But, since I frequently turn down invitations for evening events I wanted to try to revert that trend and I told the wife that tonight we would go out for ice cream no matter what.

I rushed home from the rehearsal, wolfed down some food, and we packed the kiddies into the car.

We made it to Arkakao by about 9:00pm

I had written about them before from when I visited Rosario. I was just as impressed this time around.

My kids normally don't venture outside of their favorite flavors, but tonight they ventured into uncharted territory and they tried gianduja, pistachio, coconut, chocolate with cinnamon and some fruit flavored one that I can't even remember the name (all the names are in Italian).

My eldest told me, after I asked her if she liked her ice cream: "Yours tasted like Nutella!"

She loves Nutella so I guess that would be her highest compliment. She was talking about the gianduja gelato.

In case you are wondering what the difference is between ice cream and gelato I Wiki'd it for you.

What did not show up in Wikipedia is that Arkakao promises to make their gelato on a daily basis and never serve you yesterday's batch.

They also serve chocolates; they have a lunch menu; a bar for cocktails; and they serve breakfast. Now all they need are Argentina's yummiest cookies to be excellent all the way around, hint, hint!

I´m in an apartment in Buenos Aires and never heard about that ice cream shop! I'll definitely go before I return to my country!
Thanks for sharing!

Had some of the ice cream today, was great :)

Thanks for posting that.