Something just happened to me that has not happened since I started this business. Today was Starbuck´s grand opening to the public. It was such a huge success that they called me from the store (not even three hours open) to ask me for a favor; could I make a delivery today since they are doubting that they will be able to wait for their own shipment from the warehouse before they would run out of cookies? The background noise gave every indication that the place was packed.

Mind you, their initial purchase was not a tiny one. They were expecting to be busy, it´s just that they turned out to be busier than they expected.

I was going to stop by to say hello and have a coffee, but now it seems I will be making a delivery.

By the way, there was a pretty good article in Perfil regarding Starbuck´s. The picture above is from the article. I will see if I can take a picture from the place itself; although, there might not be much to see except a mob of people drinking coffee. Check back later on today though if you are curious. 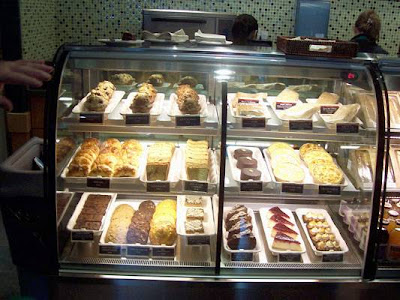 My hat is off to you Starbuck´s, the opening looks like a huge success.

According to the article they plan on opening 3 to 4 more stores before the year is up. That would be about 4 stores in 6 months.


*** update 1***
Links to other sites writing about the Starbucks opening:

***update 2***
I just got back from delivering their emergency stock of cookies and I was surprised at what I saw. I was also kicking myself for not taking my camera. There was a huge line of people waiting to get in. Sure, I thought they would be busy, but I did not expect to see a long line snaking out the building and around the corner.

The employees told me that the line has been constant since they opened up at 8am this morning.

I would say that for now, it looks like a runaway success.
at 10:28 AM

Congratulations! That's fantastic news. I look forward to checking the place out, and grabbing some of your cookies while I'm at it. Taos

Very interesting! I am excited to see how the people of Argentina will accept Starbucks in the long term, and how it will fit in.

Wooww! I was not expecting this success! Sice I think is very expensive for a middle class budget.I guess I was wrong.

Also, I just got back from there and I could not believe what I saw; there was a huge line of people waiting for their coffee. The line formed straight out to the corner and then snaked around.

When I managed to get inside, the employees told me that it has been constant, just like that, since they opened at 8am. This was 4:30pm.

My daughter was waiting in that line. She texted me and said she saw you making a big delivery with more cookies. I rushed over to say hello and congratulations, but you had already gone before I could make it back.

I was parked illegally. If I had known I would have parked the car in the parking lot and talked you into another cup.

Fun to mess with addicts.

Bere, actualy everything is so expensive here that the they are not expensive, imagine I have lunch at TGI Friday's and pay $9.95 (pesos) that would be about $3,5 dollars for a glass of coke with no refill! so a gourmet coffe at that price is not a bad thing!

Sorry, I just cannot get excited about Starbucks. As a Peetnik, to me Starbucks represents mediocre coffee. Worse is how they decimate other small coffee businesses with their corporate backing. They are more intent on having the most stores and killing the competition. So much that they have grown out of control.

To me Starbucks is another example of the worst of American culture - McDonalds, Burger King, Pizza Hut.

I am truly happy for you Frank, but think of all the cafes Starbucks will put out of business.

In San Francisco it was common to say: Friends don't buy friends Starbucks.

I can understand your position and I know you are not alone in feeling that.

I have been asked often, before Starbucks arrival, about how they could come to Argentina and if it made any sense. I always felt that it did make sense and you could see my past posts that back that up.

The trend for modern cafés in Argentina was already there. If it wasn´t, you would not have seen chains pop up like Aroma, McCafe, The Coffee Store, Cafe Martinez, etc.

I am lucky enough to have a business in which I can be part of that differentiation. I have approximately 25 employees. I can employ those people because I am looking for clients that are interested in offering high quality to their own customers and I am finding them.

As for little cafés. I really do not think they are in any danger. This is one of those differences with the US market that I was talking about. Starbuck´s will be competing with the other coffee chains, not your old time small cafés.

San Francisco must be full of people hating each other according to that saying. ;-)

Frank,
you have a nice soul... watch out for it!
I agree with Debbie.

Frankie, I'm so sad that you weren't there with Cate and Dave and I when we "shot-up" on opening day!

You were the guy I most wanted to see there ...other than the expats that I wanted to interview. I didn't meet any of them either!

I don't think the little cafes are in any danger. People here are loyal to their favorite places and can't afford Starbucks anyway.

I for one am secretly glad that there is a Starbucks because 1) I can buy whole bean coffee that doesn't have sugar in it!, 2) I really miss their espresso brownies and 3) I'm from Seattle. It's just a thing for me.
I've usually been anti-Starbucks because of the smaller shops we have in Seattle, but it is still an icon of my city, so now I know that I will have a place to go when I get homesick.

That is exactly what I was trying to get at, but I don't think I expressed myself well enough. This is what Debbie and 99 were concerned about.

Since the US did not really have a cafe culture the migration to chains was very easy. For many Americans the priority is convenience, which I think is the biggest reason fast food chains prospered.

I really don't think the Argentine consumer is going to behave exactly like their US counterparts.

I tried the espresso brownies for the first time on Wednesday last and I can see why they would be your favorites.

Maybe we can still hook up during the week. It looks like we can still relive opening day since the crowds have been the same, if not larger than on Friday.

Wow Frank Sugar...I love to see brve people that have to courage to invest in their Ideas...I have always hoped to find people like that to learn! Greetings


some of Starbuck's products are ok,
like de flavired and iced coffees.
But the plain regular coffee is just
awful, impossible to be swallowed unless you cover its flavor with some kind of chocolate sauce, or whipped cream, etc.
Anyway, I beliebe that Starbuks is a huge success mainly beacuse of Snobish people.. I mean, who want to wait in linbe for an hour to get
just a cup of coffee..?
We'll se what happens...

I understand your preference or non-preference for any flavor or coffee product.

I would never consider anyone a snob based on what coffee they buy though.

I purchased lattes for some of my employees to try. They had never heard of Starbucks before and they liked it. Some people are going to like it while others are not going to like it.

I have said it before regarding Starbucks´ future in Argentina; I know there is a market for them here.

As far as trying a plain regular coffee, the closest I came to that was a macchiato and I did not like it. I do like their latte though as well as their Frappuccinos (cold coffee drinks) in the summer.

Thanks for the nice words!

Frank, it was very nice meeting you today - and nice store! :-) I'm having a cookie monster attack at home at this very moment. :-) Thanks again!