"You're off to Great Places!"

I have recently made a couple of presentations to some local universities that have hosted American MBA students.

The first one came through my wife´s past involvement with EDDE. She used to be a professor in their MBA program. They were doing a series on Entrepreneurs and they asked her to present Sugar & Spice. She did not want to do it by herself so she asked me to go.

The second one came through a fellow expat who happens to work for the Universidad Torcuato Di Tella. My wife decided that one presentation was one too many for her and promptly nominated me to go by myself.

I had a great time during both presentations. Basically I was telling a story, our story of how we came to create this little gourmet cookie factory and how it has been growing and changing.

We started this back in 2002. Fresh from the economic meltdown of 2001 we decided to leave our corporate jobs and start a couple of our own ventures. If that wasn´t crazy enough, we also decided to start our own little family; in fact, the name Sugar & Spice comes from that little children´s ditty that sings about what little girls and little boys are made from. I am so glad we had a girl, if you look at it from that point of view.

As we grew from a home based business; to a small rental property with used equipment; to a state of the art 800 sq meter facility, we learned some things along the way and shared frustrations as well as some laughs.

In one of our latest hiring efforts we were looking for a salesperson. This young woman came in and stated that, although she knew a little English, she actually had been studying it for years through group classes, tutors, private schools, public schools, etc., and that she could never get the hang of the language due most likely to her dislike of Americans...

Poor girl, I couldn´t really blame her, I mean there are some Americans that I dislike myself; however, she really should try to refrain from expressing any racism or at least do a little research for a job interview. I mean, if in a Spanish speaking country you interview at a company that has an English name, there is a slight chance that someone may either be American, or would at least like Americans.

In any case, she did not get the job, but it was for other reasons.

There was also the time when another young woman came in, and my wife sort of put her on the spot by asking her "What would be the first thing you would do with the company?", and she came up with getting rid of the color orange...

Maybe it was the first color that she saw, seeing that we have it prominently displayed everywhere. She would obviously have had a very busy first day if we would have let her have her way.

She also did not get the job.

I was asked about cultural differences. Right away I was told to carry a book with me because I would end up waiting around most of the time. I imagined myself transported to the whimsical pages of a Dr. Suess book most appropriately called "Oh, the Places You´ll Go" and specifically land in the "Waiting Place.....

In all fairness I see Argentina represented in other parts of the book... "It's opener there in the wide open air". I am currently looking for the "bright places where Boom Bands are playing", and I know they are here and just within reach.

Although in many instances I do end up waiting, it is no longer that annoying to me. I now take my iPod with me. At first, I got reacquainted with my music; now I listen to podcasts. I love my iPod. I know, I am not the first one to express undying devotion to this little device. But, thanks to this little marvel, I was very happy and surprised to see how public radio has grown. I count "This American Life" as one of my most favorite programs. I am hooked on this show. 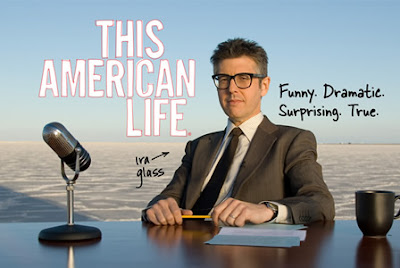 Thanks to this show I have learned about the chimpanzee population in the United States and how they live after they retire in the show titled "Human Resources".

I have been transported back to Chicago where the bridges smell like chocolate.

I have heard the embarrassing way that the Bush Administration has asserted its power in various small ways with big implications for the rest of us down the road in "The Audacity of Government".

I have heard countless stories that have moved me to tears as well as to laughter.

This is public radio at its best. At least now I don´t mind too much about the waiting around.

One other little gem of knowledge or experience I have picked up, that was not included in Dr. Suess's book, is to build high up or avoid flood zones; meanwhile, I am trying "to be dexterous and deft. And never to mix up your right foot with your left.".

My husband and I are big fans of "This American Life." I haven't seen the television series Ira Glass helped produce yet. Have you?

I have not seen them. I also missed their movie theater screening by one day the last time I visited the States.

Although, I would like to view the show I think I would prefer to listen to it.

Which one do you think you would end up liking more?

I am afraid to see the TV show since so much of the allure of radio is our own imagination.

If they ordered another season, it must be good, though.