Lipstick on a Pig 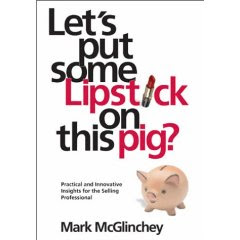 "I’m not insinuating anyone is a pig. Nor am I suggesting you need to be wearing lipstick. I believe the saying ‘let’s put some lipstick on this pig’ originated in the brokerage/investment banking industry. Typically, the saying referred to promoting or selling a stock or investment product, which the broker didn’t believe in or which may not have been in the client’s best interest to buy."--Mark McGlinchey

That´s right Obama, only John McCain can use that phrase. Maybe that´s the real reason he is so angry about it. Oh wait, so can Torie Clark, Vice President Dick Cheney, Sen. Maria Cantwell of Washington state, Sen. James Inhofe of Oklahoma, Sen. Mitch McConnell of Kentucky, Rep. John Mica of Florida and Rep. Tom Tancredo of Colorado, as well as the author Mark McGlinchey who is responsible for that book you see above.

But McCain's campaign is not about to let the issue go. They released a Web ad Wednesday that plays Obama's lipstick comments, then asks, "Ready to lead? No. Ready to smear? Yes."

Hmm, lately McCain´s ads seem to describe McCain more than his intended target. Would that be calling the kettle black?

Now let´s see a classy, Presidential type response from Obama. This guy sounds more and more like a President than his counterpart:

Email ThisBlogThis!Share to TwitterShare to FacebookShare to Pinterest
Labels: Politics

yep you gotta love how they are doing a great job of distracting the American people from the real issues, but I have faith that the fog will lift and he and Palin will have to go to Alaska with their devil tails between their legs to practice putting lipstick on pigs, and maybe moose too...

Classy response, as you said.

Loved the response! I really hope he'll pull it off; finally somebody with brains and common sense (plus, he's sorta cute ;))