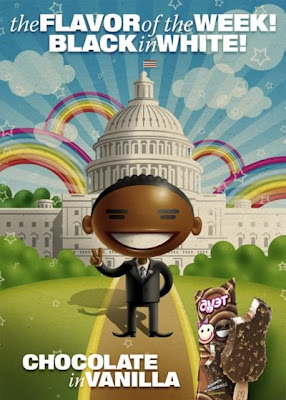 Quick, what was your first reaction on seeing this Russian ad for a new ice cream?

I have to admit that I thought it was cute and funny. I saw this at Comedy Central´s Indecision blog, who in turn got it from Huff Po. Some of the comments are also pretty good.

But we are aware that you americans are a bit hysterical about accidently showing your racism.--Arodo

You know what's way more offensive than a smiling cartoon Obama in a Russian ad?
The American writer imposing his own culture-specific taboos on other countries--nobodyatall

I also remember reading someone saying that we in turn have used Russians to sell blast shelters, which one would be more offensive?

In any case, the Huff Po writer Alex Leo is all offended by this. I just can't see why.

This does remind me of several conversations I have had regarding racism here in Argentina. Yes, it exists like it does in just about every corner of the world, but it is also different. We as Americans can not come down to another country and impose our own culture specific taboos on other cultures.

One case in point is that many people in Latin America use the term "negrito" or "gordita" and they are used as terms of endearment. I remember being in the States and calling my girls gorditas and a friend of mine was shocked that I might be sowing the seeds of some future neurosis in my child. Yes, she is right that if I lived in the States I should not be calling my child fatso or chubby, but gordita has nothing to do with those terms and my girls live in Argentina. If I were to move back, I would have to stop referring to them in that way.

If you are an expat, have you started to notice some of your own cultural projections? Have you been able to overcome them? Or have you wrapped yourselves in this new culture, snuggled up to your significant other, slapped them in the ass and called them "mi gordita(o)de mi corazon" and have gotten a kiss back instead of a slap or a cold shoulder?

Instead of it being a racist test, you have now turned it into a cultural adaptation test. Good luck, now start practicing.

Now I just hope some of that Obama inspired marketing mojo finds its way over here.
at 2:08 PM

I thought it was cute, but I can TOTALLY imagine how an American could be offended by it.

This being said, I've been living outside the US for over ten years now, so my perspective has probably changed quite a bit. Americans generally feel good about themselves when they get uptight over something they consider to be politically incorrect. I know I've been there.

Thanks for the laugh in our household with your paragraph on "mi gordita(o)de mi corazon". Classic!!

I do believe that Americans are way too uptight and that "political correctness" has sucked the fun and humor out of a lot of life.

I like the add, and hey, what could possibly be bad in being referred to as chocolate or vanilla (yum-yum!)...
In Germany political correctness is a big deal, too and in the US it's really over the top. It leads to people constantly having to watch what they say cause somebody MIGHT think they are racist. Personally, I think it's more important if they are or not. What's better, a non-racist who makes a politically incorrect remark or a racist who manages to bite his tongue?
Here in Argentina I flinched quite a few times when I heard terms like chino or negro but you learn how to tell the racism motivated from the cariñosos :)

I think the ad is cute too.

Here in Argentina I adore the black faced "negrito" pastries, and the black skinned dolls.
And I do not think my black grandmother would have been offended by any of this, as she was the one who gave me my favourite doll, which happened to be a gollywog.

People are way too uptight about trying to be PC all the time. We need to start laughing at ourselves, it is much more healing, than tip toeing around the subject.

Personally, I think there is nothing wrong with the ad... and it works, i'd kill everyone in this office for a russian ice cream :P

I remember some one that was shocked to know that I called my cat "gorda". I found myself unable to transmit that it was the most beautiful word to express my love to my dear Espuma...

I also remember some one that felt almost insulted because I said that I call my brother "Negrito" to show him how much I adore him...

I even remember another person that was horrified when Obama joked about having a dog as mutt as himself...

As for the ad, I remember my own stupid moment when I heard the word "Oreo" used as an insult in the US. I thought to myself: that´s a sweet thing, why is that person using it to express his hate? Silly me...

Interpretation comes with the interpreter and his/her own experiences, mental structures and background.

Thanks to all of you bichitos for leaving your comments. I liked every single one of them.