Vote For The Smart Guy This Time... Please

I was always the kind that shied away from groups and associations. I especially considered myself not very political. I would follow politics and I would vote, but I never considered myself either a Democrat, Republican or Libertarian.

I have been so disappointed and disenchanted with the US Government, specifically George W's administration, that he has made me run over and join the Democratic party. My own personal reasons for being so against him and what he has done are numerous and I could list them out, but then it would feel more like a rant on my part and quite boring. Let's just say I do have many reasons.

I also have my reasons for being hopeful of a better tomorrow. I hope my country decides, this time, to choose the smart guy, not the guy you could have a beer with. We already gave the job to a "regular Joe" TWICE and that turned out to be a disaster. I would much rather have a guy who is much smarter than me in that oval office than a guy who didn't know squat about Iraq before he invaded it for example.

Is this a case of deja-vu? We have McCain making Bush type mistakes:

“We continue to be concerned about Iranian taking Al Qaeda into Iran, training them and sending them back,’’ Mr. McCain said at the news conference. Asked about that statement, Mr. McCain said: “Well, it’s common knowledge and has been reported in the media that Al Qaeda is going back into Iran and receiving training and are coming back into Iraq from Iran. That’s well known. And it’s unfortunate.”

Al Qaeda is Sunni and it would be a stretch to have Iran (they are shia) friendly with a Sunni group. He didn't make this mistake just once either.

So if you are an American citizen, or you know of any in Buenos Aires, please tell them to go out and please vote for the Democrat or at least just vote. In fact, they can go to Sir Will's Pub in micro-centro every Thursday starting at 7pm and Democrat's Abroad will help you in registering to vote. We could also talk politics over a beer or two. 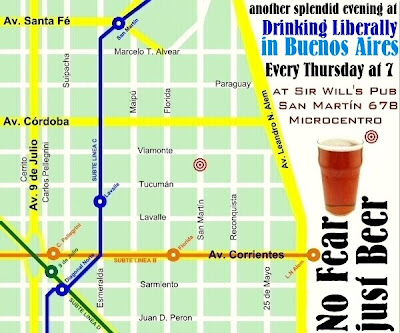 Many thanks to Yanqui Mike for some of these links, banners, and for taking the lead in creating Democrats Abroad Argentina!
at 2:21 AM

At Democrats Abroad Argentina we all love you too Frankie Sugar!

Frank - this is an amazing post. Thanks for the support! I look forward to seeing you this and many future Thursdays. Meghan