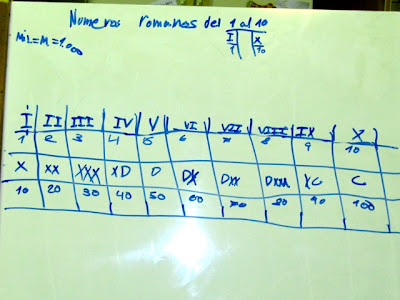 Just last night my daughter decided that I needed a brushing up on Roman Numerals. I had told her previously that 'yeah, I knew them'.

Although when I had told her, I wasn't exactly sure if I really did know them.

I remember learning them, but how much did I really remember?

It turns out that I remembered quite a bit. But, I hope she didn't catch on. For her sake, I forgot quite a lot.

As it turns out they are useful beyond figuring out how many Superbowls have been played. And I found a great resource that has everything you ever needed to learn about roman numerals.

I also found this one that has a nice little graph that is a bit more detailed than the one my daughter used on me.

On one of the sites there was a comment from a mom saying that she did not want her kid learning Arabic numbers. That one made me giggle a little.

And after all of this you are still not sure how to use them, you can convert numbers here.

And of course, there is an app for that.

One little disclaimer. Don't pay too much attention to my picture; it has some mistakes. After all, it's from a 9 year old who just saw them for the very first time.
at 9:52 AM