Achievement seems to be connected with action.
Successful men and women keep moving.
They make mistakes, but they don't quit.
- Conrad Hilton

Yes, that's right, Yanqui Mike is leaving Buenos Aires. I first heard about him, or actually read his blog back around 2006. He had, and actually still has, a very popular blog.

He has also been very busy in real life. He is a character, and I am glad to have gotten to know him and his wife and count them as friends.

But life is calling for them to move on to greener pastures and I mean this literally not figuratively. He is a cattle rancher, a greengo gaucho you might say; and he's going to be closer to his little dogies (and the rest of his herd). You can read a little bit of background on him from his Huffington Post bio.

Like the bio says, he became the founding chairman of Democrats Abroad Argentina. He reached out to me to be one of the founding members as well.

He eventually roped me into running for office and although I really looked forward to working side by side with him, it was not the greatest experience, but that was not really his fault and that whole experience would require a series of blog posts on their own.

If all that was not enough, he also started the Buenos Aires chapter of Drinking Liberally.

Throughout all of this, he has kept us entertained, informed and has sparked spirited debate several times through his popular blog. If you have never read it you should. Here are just a sampling of some of his posts:

Mary McCunne
The Authentics
Uber Alles
My last post... for my own safety
Martin Varsavsky
The Lexington Incident - This is a four part post on the United States role in the Falklands / Las Malvinas. This is one of my favorite posts.

And the one post that he wrote back in 2007 and makes him look like a sage since it's pretty spot on with how the beef industry has evolved (or imploded might be a better word).
I am become a farmer

So Mike and Alicia, let me take a moment to say thanks and that we will miss both of you around here. I also wish you two the best in your new life out in the campo.

I just realized I don't have any pictures of us, but I do have one of Alicia at least. By the way, she also blogs. 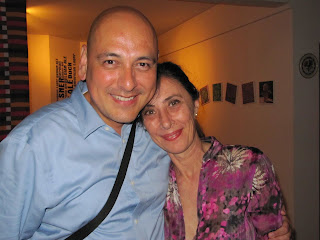 I enjoy Mike's blog and I hope it keeps at it between chasing carne around.

you're sooo sweet, Frank...
We love you too; we respect you in the same way; we'll always be friends.
muac! muac! muac!
Mike & Alicia