Raked over the coals 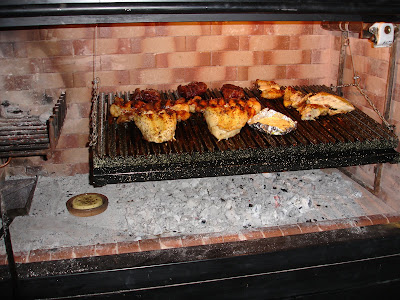 This is a saying in English that comes from when people used to burn at the stake for heresy, witchcraft, or denouncing your faith. Recently I have seen this phrase used more often over at the BANewcomer´s website. People were starting to brace themselves for follow up remarks that they were sure were going to be nasty.

The newcomers site was originally created by an American expat who had a terrible time adjusting to Argentina. She wanted to create a site where other expats could pool their knowledgebase together and maybe keep from getting ripped-off by the plumber for example, or find out where you can find Peanut Butter since the locals are not too keen on the stuff. You know, she just wanted a way to make her life a little easier and other expats as well.

This list has mushroomed and there are more than 1600 members. The owner has since left to go back to the United States but she still kept moderating the group. Recently she has run into a bit of some bad luck and she really can´t look after the group any more so she asked me and a couple of other people to moderate it for her.

We took over the reigns right when the group was caught with many bickering e-mails. The original topic to a given thread was no longer as important as the many directions in which the thread would take off to. The group started to see messages about racism, abortion, gun control, religion, etc. All juicy subjects for sure but none which can lead to a sensible conversation among mostly strangers sitting behind a computer screen. It was getting ugly.

The new moderators and myself decided that we had to just stop this because it was getting out of hand. I was the vocal one and addressed everyone and let them know that we were going to moderate heavily and basically told everyone to drop the threads that were going around.

I received a little bit of hate mail (okay maybe one), mostly positive mail, and a couple of e-mails expressing dislike for the measures and concern but were willing to live with it for now.

The result was that it worked. For now I no longer see any nasty messages in the group.

I am a very happy camper. Not too mention, I was doing all this e-mailing, talking with the other moderators and bringing the hammer down while I was grilling. The picture shows the results of my labor in between my frantic e-mailing. The chicken was fantastic, the filet mignon was a juicy medium rare and I helped bring a little peace to the Newcomer´s website, all without raking anyone over the coals.
at 5:33 PM

My feeling is this frank about those lists. When you try to censor them because people talk about religion politics and the like you end up having a very boring bunch.

I am not following any specific example, to answer your point about going down the path of destruction.

The list was originally created with the purpose of informing. It was never intended to be a discussion forum that would cover controversial topics. It would just get out of control.

If you find it boring then you should look elsewhere. Being exciting was never the intention of that list.

In fact, someone started a second site called Blackjumpers and they specifically mentioned that they will not moderate any comments. You might want to get an exciting thread going over on that group. By the way, I also participate on that one.

Here is the link:
http://groups.yahoo.com/group/BABlackJumpers/