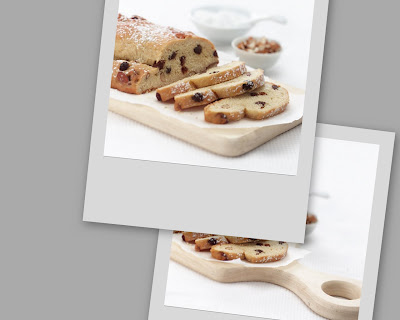 Our newest treat comes from (the idea that is). So what is a Stollen and why would anyone make a 4 ton version?

Stollen was first created in the middle ages in and it was not a very tasty invention. The first Stollen consisted of flour, yeast and water. It sounded more like something you would feed to a prison population not actually sell it for money. The Catholic powers that be prohibited the use of butter during Advent or Lent (4 weeks before Christmas). Eventually the prohibition of butter during Lent was rescinded for a select few bakers, and then they allowed a few more until finally everyone could get in on the deal.

Stollen is very popular in during Christmas but it is available year round. Our stolen is based on the yummy original style (not the prison food fare, the other original). Ours is made with Rosinen (raisin), Mandel (almonds), and Orangeat (candied orange peel) and is very moist. If you like, you can sprinkle powdered sugar for a final classic touch.

Email ThisBlogThis!Share to TwitterShare to FacebookShare to Pinterest
Labels: Sugar and Spice Goodies

Frank, did you consider making panettone? I know I've seen it available around Christmas (but imported from Italy).

Did you add more sugar to the classic stollen receipe to appeal to the Argentine sweet tooth? Since stollen is "sugar coated" it should go down well in Argentina ;-)

Yep we do Panettone. Ours is made with a touch of orange blossom water, malt extract followed by Hazelnuts, Almonds, Walnuts, Cashews, plump juicy raisins and glacé orange peel all marinated in cognac. The Panettone is then topped off with a crunchy almond topping.

As for the Stollen, we achieved a nice balance. I did not want to make it overly sweet however, everyone has their own idea as to what that means to them.

We did not cover ours with powdered sugar becuase after a time the bread starts soaking up the sugar and then it really becomes super sweet and at the same time it looses points on aesthetics.

Congratulations on your company!