Is Argentina Too Efficient?

Seriously, I am not laughing as I type this.

This is an example:

(mozo is what you call waiters here in Argentina)


I could just say "un chopp" instead of asking for a beer and that would cut the conversation down by half!

And what is a chopp you might ask? It's a mug, or a glass. It's how you order beer on tap.

When I first came to Argentina I saw these "cervecerías" and I thought, great, they have beer joints!

I am going to be able to go in and find some varieties of beer that I have not yet discovered since I am from a different hemisphere away.

I wonder how many types of beer I am going to find....

One is the usual number of beer brand you would find at these places.

Fernando of BA Cast has a different point of view. Here is a recent conversation we had on the topic of "variety", his new pet peeve.


Fer: The thing's when you go to the supermarket and ask "where's the bitter?" and instead of pointing you to the alley, they ask you "what bitter do you want? Bitter sweet, bitter sour, bitter sour with a dash of sweet...decaf sweet bitter?"

Me: But, when you go to a "cervecería" here and ask for beer, it reminds me of repo man. There is only "beer", no asking what kind or anything. 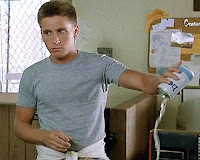 Fer: Isn't that great?! Aren't you guys all about "getting to the point"? There you go...

Me: It's too efficient it's scary, it's almost anti Argentine the way it is so efficient. I mean you just sit and say beer and that's it, end of conversation.

At the very most the waiter would ask you if you want head on the beer or not when he serves it.

Also, it's not wine, serve the whole damned thing!

And so it goes. That conversation is still taking place by the way. Who knows where it will end up, but at the very least, we should continue it over beer, but at a real cervecería like Antares for example.

OH, Baby! I love that about La República, tambien!

When you ask a waitress for a beer in the "old country" ...get ready for her head to roll back, her eyes to roll around the sockets ...and then this:

Long gone are the days when I could walk down the stairs at the old Billy Goat Tavern and holler, "Stavros! Pour me a reg´lar!" and end up with a mug of ice cold Schlitz before I ever got to the barstool.

Just to clarify, for those that don´t know me, yeah, I am a beer snob, guilty as charged.

Even Mike here should know that I myself would not like those joints he has lampooned in his response, which is right on the money by the way.

I like a happy medium. I find that both of these types of places bore me to death.

Thankfully, the beer scene around here is changing from what it was like 10 years ago and I am grateful for being able to belly up to a bar and actually being able to choose from several artisan beers.

Thanks for bringing up a valid point though Mike.