The City that Fades Away

Jeff Barry is the owner of the blog Buenos Aires, City of Faded Elegance and he started an irregular series of posts about buildings that are currently fading away, crumbling, and most likely will be facing a wrecking crew in the near future. The post is titled The City that Fades Away.

I decided to chip in and send in this picture of a building in my neighborhood. I live in what has always been a residential neighborhood and now is one of the city´s hottest tourist destination spots, Palermo Soho, which happens to be part of Palermo Viejo. This area is now currently known for it´s street lined boutiques, recycled homes, and restaurants. When I moved there it was such a quite neighborhood. My own house was built around the late 1800´s (obviously recycled). I used to have a fruit stand on the corner and the nearest serious restaurant was several blocks away. Now I have no more fruit stand, and I have to put up with people parking in front of my garage, but I don´t even have to leave my block to have a choice of at least four good restaurants. 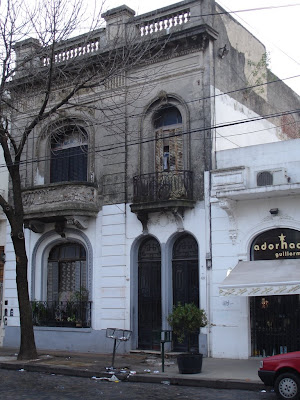 This picture I took looking down El Salvador from the intersection with Armenia. Just a couple doors down, on the corner, is Mark´s Deli, and our newest famous new neighbor is non other than Francis Ford Coppola himself. There is still life within this building. Every once in a while I see someone going in or out. However, the balconies are in such bad state that I don´t even dare walk underneath them for fear that they would fall at any moment.

The parks in this area used to be old as well. They are all being recycled by the city. This was an election year so all the parks got recycled. Palermo Viejo is fading away rather quickly. I wonder if they will still call it "Viejo" after there is nothing old left about it.
at 4:21 PM

I used to live in there from 1965 to 1991, and then nobody call it "Soho". It was "Palermo Viejo" or, simply, "Palermo Reo", and limits were Córdoba, Juan B. Justo, Paraguay, Canning (Scalabrini Ortiz, today).
And I work for 12 years in a small jewel factory on the same block, if I didn't miss my aim: El Salvador 4737 (between Gurruchaga y Armenia -former Acevedo).
I guess they change the whole neighborhood.

You are correct. That block as well as the one between Malabia and Armenia are changing all the time. There are fewer and fewer residential homes these days.

It´s a matter of time before they make a peatonal over here. On the weekends it sure feels like it with so many people walking around.

It is a little melancholic though. On the one hand you see investment and comercial activity but then you see a neighborhood´s character dissapearing. You see that mostly at night and early mornings where the drunks outnumber the sober on the street.

Hi Frank, thanks for joining the series! -- jeff

I’m often in two minds about many of these deteriorating buildings. While it would be great to see them restored to their former glory, I can understand why they are often demolished.

Upon close inspection, many of these buildings have structural problems due to settlement, and the interiors are in bad shape. Any restoration would probably only be able to preserve the exterior, and the expense to restore the property would be beyond most people’s pockets, if the goal was to use it as a personal residence. I suspect that it might actually be cheaper to tear some buildings down and construct a replica. Trying to restore the interiors faithful to the period would be an undertaking that would be very difficult in BsAs, not to mention extremely expensive.

Considering the erratic development in neighborhoods such as yours, I wouldn’t want to end up living in a restored building next to a new apartment building that overshadowed it, or next to some commercial establishment that might degrade the living experience there. Not to mention that I often see buildings like these that the owners have lavished great care on, continually being defaced with graffiti.

Most of the more recent restorations that I see are of buildings that are set back from the sidewalk (often behind a secure wall or fence), and provision has been made for parking (either a separate structure or sometimes in a newly-created basement). These buildings are usually located on quieter, almost-wholly residential blocks.

The PH in your picture seems more like an anomaly to me – with the street level floor being in much better shape it seems than the upper level. I certainly wouldn’t want to be living downstairs and have construction going on above me for a couple of years.

It’s often unclear whether anybody is living (legally) in some of these buildings. Sometimes the openings have been bricked up to prevent ingress, so I presume the owner is just waiting for the time to sell. Considering the age of these buildings, I would imagine that the property taxes are very low, so that the carrying expense is negligible – but you have to time your sale to maximize profit of course.

You bring up some good points. The old buildings for example had mud mixed into the walls. The wall that goes down the middle would retain a lot of humidity if for example one side was fixed and not the whole wall.

As for apartment buildings, there is a height limit in this area so the only danger I have is if my neighbor kicks the bucket and her offspring, who live in a different city decide to sell the place. If that would happen I would most likely face a very important construction job since their property is pretty big.

Also, there are several buildings that are taken illegally. In this immediate area they have pretty much disappeared. However, we have such a building right next door to the factory. Many of the robberies in the area of the factory have a source in that building. My own employees have been mugged going home from work. The city a while back put a sticker on the door notifying that the building was condemned but nothing has happened yet. I am going to see if I can find somewhere I can complain or notify. There are like 30 families living in this house in makeshift rooms. Some of them work and only a small fraction of the occupants are troublemakers.

I also would not count on that bottom half being in much better shape. It was just recently painted to match the neighbor's white painted building. Before it looked pretty much like the upstairs did.

There is another example of a building that was rehabbed minimally and looks nice. I am going to see if I add to this series with one more picture.

There's a tiny hole in the wall cafe/restaurant in Palermo Hollywood-i can never remember the address, we just went in whenever we happened to be passing. On the wall there's one of those cartoon map calendars that are given away and sponsored by local businesses and that mark the businesses on the map. it's from 2001-there are hardly any restaurants or bars, most of the businesses marked are car body repair shops and other sorts of talleres. They're mostly gone now, replaced by bars and generic pretty restaurants.

In a way it's a shame, but at the same time it's generating money for the area. Sure, the character of the barrio has changed but that's what happens anywhere over time-things change. And you have to remember that it if there wasn't a restaurant or bar taking up that large corner building, it'd be knocked down and turned into a DIY tower block...

Here in Valparaiso, a lot of the locals complain about Cerros Alegre and Concepcion losing their original character. A lot of restaurants and a few bars have opened up in the last few years. Also, many old mansions have been converted into apartments. Being a unesco world heritage site, the exterior of buildings can't be altered so the area looks the same-but better. The restaurants and apartments look after their buildings. In many cases, if it weren't for this investment, the properties would, quite literally, fall down in the next earthquake.

Gentrification has its downside-it makes an area too expensive for its original inhabitants to live in, property prices increase to beyond the means of a normal family etc but it also stimulates investment and can help restore a faded neighbourhood to its former glory.

The challenge facing BA is maintaining the physical character of the low-rise barrios whilst also meeting the needs of the businesses and construction companies that are pouring funds into these areas. It's not easy but with decent planning it can be done.

Looks like you have seen this before over on the other side of the mountains.

Fortunately, around here they seem to be respecting the building codes and there are no tall buildings going up in the inmediate surrounding area.

In fact, I was walking around this morning and took another picture of another ex-home that is now a shop. I will be posting it soon.

I do admit, the neighborhood does look much better these days. I have had very few incidents with people bothering us i.e. ringing the doorbell at 4am. Mostly it has been people parking in front of our garage.

I also found out that if you paint your facade inmediately after someone defaces it they tend not to bother you so much. I have had to paint my facade a total of about 3 times due to graffiti. I think that is pretty good considering the frequency that I see it happening to other buildings in the area. I think it´s becuase I paint over it inmediately. Their handywork just doesn´t last long on my house. Besides my kid is starting to read and the last thing I need is for her to be asking me what those words are written on our house.