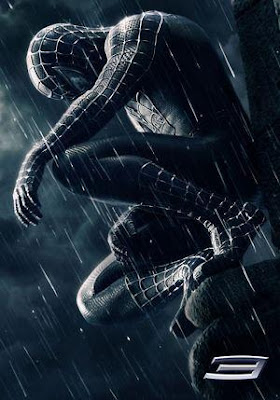 So how do I talk about Spider Man 3, which is in fact a movie, without calling it a movie review? I don´t know, but this is my attempt.

I am not a movie critic and I don´t intend to pretend to be one so I won´t even try. I want to talk about one particular scene in the movie.

The added wrinkle to my movie going experience was that I was watching this in Argentina. Normally this would have been no different than watching it back in Chicago if it weren´t for one little scene that caused a collective groan when it appeared on stage.

Yep, that huge, flapping in the virtual wind, digital reproduction of old glory as background for Spidey on his way to a good old fashioned street fight. What in the world was Sam Raimi thinking? Have I been away so long from the States that I have lost touch with my fellow countrymen?

There are several ways in which this is wrong:

Currently the USA is involved in a couple of wars. One of which no one can say anything about and pretty much expected. That´s the one in Afghanistan where the 9-11 attack originated from. The other one, well, what can I say other than it´s the third biggest mistake our country has recently made (first one, letting Bush get his way the first time around in the 2000 elections; second one, giving him the job that he managed to steal in the first place). All of these things together gives the USA a rather bad image abroad these days (not to mention that wall, some Americans call it a gate, that is being built and maintained along the Mexican border).

Slapping a big flag behind Spider Man looks so cheesy, so tacky, so tasteless. Are we so clueless that we fail to think what people would feel like watching a movie and seeing a commercial for the USA in a Spider Man film? What is the point? That Spider Man stands for America? Was this meant as "Let´s go USA and beat up some bad guys"? I don´t like the use of my flag for those purposes. I would rather see us waving it around on our way to the voting polls.

Actually, my first reaction to this scene was joining the rest of the movie goers in that communal groan. Then, I thought to myself; this can´t be. There has to be an explanation to this; it can´t just be a pointless blunder; it can´t be selfish boasting; it can´t be naive, nationalistic pride.

Now this is the good part. I started thinking possibilities: What if this was actually a dig towards Bush and his hawks? I mean the main message behind Spider Man has been that you are defined by your choices. You can choose to be good or choose to be bad. Your choices dictate that about who you are.

The flag scene came after Spidey rejected his bad dark side and was going to go beat up the bad guys. Could it be that the message was aimed at the current administration and telling them that they did not represent our America. After the fighting subsides and Spidey is left standing he finally forgives the person that shot and killed his uncle. Was the director trying to say that this is more like what America should be like? Because this is not how America has been behaving in the eyes of most people over here. Quite the opposite actually. Most people would probably tell you that the black substance that created Venom is more like how Bush has been acting.

To be honest, I have no idea what the director was thinking. I choose to believe my theory regardless of the original intentions of the people that made the movie. My theory makes more sense. My theory may be a little more naive but I can´t think of any other good reason for putting the flag up there in a Spider Man movie of all places.

Email ThisBlogThis!Share to TwitterShare to FacebookShare to Pinterest
Labels: Misc.

I hope you don't mind I respond to you in English. Yes, I do feel a little something inside when I see my flag flying in the wind. I also feel a little something else when it is used. Most likely Raimi is just proud of his country and just wanted to put the flag in there like he has in his other movies (in a more subtle form I might add). I read somewhere that he has a big flag tacked to the wall of his office. But then again could he have been so naive or did he know this would get a reaction from people? What does he as person have to sell? This was a Spider-Man movie stressing ethics, the idea that good overcomes evil by choosing to do the right thing. These very traits are not what characterizes the current EEUU administration.

I don't have the time to sort through all the movie reviews just to find out what the critics said about it. I just wanted to write about what I felt and saw while it was still fresh in my mind.

Don't get me wrong. I love my country and I love my flag. I hate the way some of my countrymen behave. There is a whole huge world outside the US borders and keeping that in mind wouldn't hurt too much.

you're not the only one to notice the flag (me, mr observant didn't see a thing). A quick google search come up with all this

I was in BA last week and completely forgot to come and try your cookies. Next time...

Frank –
While I can’t comment on the use of the flag in SM3, ever since 9-11 everything seems to be wrapped up (or should I say smothered) in flags in the US.

Every political speech completes for how many flags they can fit into the background (and the bigger the better). Directly after 9-11 there were buildings wrapped in huge flags, to the point where there was a public outcry of inappropriateness. It’s all about marketing really – buy the message/product or you’re not a patriot.

For the past few years, around July 4th, one of the local real estate agents has planted plastic flags in yards around our neighborhood with a commercial message attached. My wife immediately rips out the ones around our house and tosses them into the garbage. Well, she is a native Chicagoan …

Thanks for the links. I saw most of them. You have to wade through all the reviews of the movie to get to the comments about the flag. I was hoping for a little more discussion about that in particular. But I guess since it is a Spider Man movie it just really boils down to a director who wanted to be patriotic and some people just thought it went overboard besides the movie being a disappointment for them.

As for the cookies... I am working on getting them into Chile so you might not have to wait so long. Keep checking out this blog for notice of this in the future. Believe me, once it happens I am definitely writing about that.

I went to Disney last year and I had the same feeling when I went to SeaWorld and part of the introduction was a giant screen paying tribute to "all" veterans of every war and country, while showing the American flag and war planes of course and finishing off with a picture of governor Bush (the big brother). This was so blatant misuse of the flag and a total commercial for the armed forces. I feel like I am patriotic but I don't have to need to shove the flag into everyone's face to prove it.

When I lived in the States my town would also plant little plastic flags on the 4th of July. I thought it was pretty cool because that was okay to do and appropriate. However, having the flag and a commercial message is not. I agree with you and your wife on what she did. I would have done the same thing. There must be something in the water over there in Chicago. One thing I am proud of is that Illinois in both elections was one of the first states to turn out blue (voting democrat).