Soup of the Devil 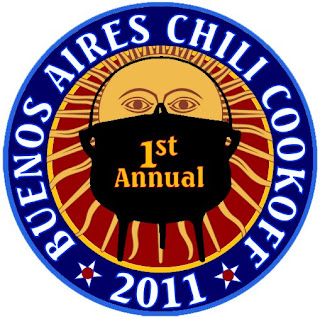 "Wish I had time for just one more bowl of chili."
- Alleged dying words of Kit Carson (1809-1868) Frontiersman and Mountain Man.

"Chili concocted outside of Texas is usually a weak, apologetic imitation of the real thing. One of the first things I do when I get home to Texas is to have a bowl of red. There is simply nothing better."
- Lyndon B. Johnson, 36th President of the United States

Much has changed since LBJ's time. Now, instead of a war on poverty, we have a war on terror for example. Also, many of the things he fought for are currently being targeted and need to be fought for again like Public Broadcasting, Medicare, Medicaid, environmental protection, etc.

However, some things are similar; the country is embroiled in very unpopular wars and chili con carne is still being made pretty much the same way it was when he was President.

And now, there is a group of expats who are going to do their damnedest to prove his words wrong and bring a little bit of Texas down to Argentina.

This fourth of July weekend, the 3rd of July to be exact, there will be a first ever, in the history of Argentina, chili cook-off!

So why has it been kind of a secret? Well, it's probably best to start from the very beginning. As far as I can tell, this has just been a grassroots idea that took off on it's own within Facebook.

Maria Carra of Buenos Aires Foodies had set up a Foodie group in Facebook. There were only very few of us within this group, but it was never really used for anything.

Back on the 30th of May I posted a question to the group:

Not 24 hours pass and Yanqui Mike throws in a suggestion about having a Chili Cookoff.

Right away, it got a great response from the few in this select little group and we decided that this idea should happen and that it should have a page of it's own and the 1st Annual Buenos Aires Chili Cookoff is born.

From that point on, the idea motivated several of us to take up the challenge of volunteering around it. We set goals, divided work, brainstormed, some of us met for the very first time and some of us have known each other for years and through teamwork are putting this thing together all in a very last minute hectic way.

I mean, this was thought up on the 31st of May for an event that has to take place on the 3rd of July!


The Venue: Genó Bar in Palermo Hollywood / Guatemala 5499 / 1pm to 5pm (or sooner depending on when we run out of Chili).

Yep, you read that right. I predict that we will be running out of chili so keep that in mind and come by early. (we are even organizing back up, non competing chili just in case we run out).

As of this lazy cool Sunday afternoon we have 183 people who have declared their desire to come so far.

There are also comments from people who can not make it, but would have loved to have been here to compete because they proclaim to have the very best chili and they would have wiped the floor with those of you who have entered this year's competition.

So, those of you who have entered, keep in mind that for next year, there are already people gunning for you.

It's a good thing that there will be a next year for this!

So, given all the many unknowns of this very first annual chili cookoff, we settled on a somewhat smallish place that was willing to open on a Sunday afternoon (when they are not normally open) and would be willing to host this event and have a kitchen that they would not mind sharing with us.

Genó Beer Bar, you are angels and I can't thank you enough!

By the way, Genó Beer Bar is a new bar that specializes in having imported and some artisan beers!

So come by early, bring the whole family and share a bit of Americana on the 4th of July weekend with fellow expats and curious Argentines.

Here are the details:

Tickets will be sold for $5 pesos each. Each ticket gets you either a taster of chili, cornbread, cookies, beer, etc.

The weather is supposed to be just like today!

And, we may even have a couple of mascots as well (Lisa and Allie)... 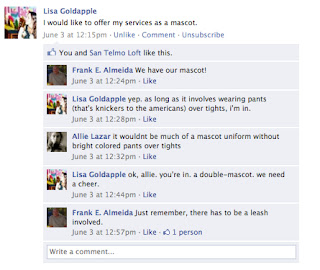 If you are on Facebook head on over to the event link for details.

Oh, and by the way, what does 1st prize win? 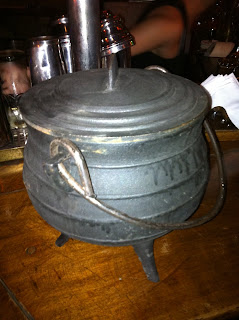 And, we will have buttons! 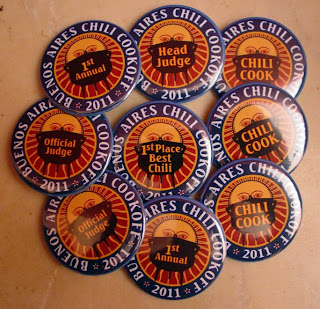 So for those that have signed up for the competition and answered Yanqui Mike's call to "Make chili, make history!" I wish you lots of luck and fun!

For my fellow judges, I leave you with a choice quote on what chili is:


"It can only truly be Texas red if it walks the thin line just this side of indigestibility: Damning the mouth that eats it and defying the stomach to digest it, the ingredients are hardly willing to lie in the same pot together." - John Thorne, Simple Cooking

On a positive note, LBJ did manage to succeed in pushing through much of his Great Society legislation. Even though he pushed for US involvement in Vietnam, we did finally leave. Maybe, we can start to see our own current war efforts shrink. Maybe we can also see many of the great social programs survive and we can still keep enjoying some authentic Texas red just like LBJ would have liked.

Damn, man! You said it all.

Nice post! It must be noted that even though the LBJ library is at the University of Texas, he and I share the same alma mater--Texas State! Formerly known as Southwest Texas and where he signed the Higher Education Act of 1965. While we're talking presidential facts related to Texas, it should also be noted that the Bush family is from Massachusetts several generations back (and George W was born in Connecticut). I'm just sayin'....

“Some folks look at me and see a certain swagger, which in Texas is called "walking."-GWB

So you mean that was actually a Connecticut swagger?

Thank you for the compliments!